The HYTHIRM team deployed for seven Space Shuttle missions in an effort to gather thermal imagery data that would expand the understanding of the growth and development of the hypersonic boundary layer on the windward side of the orbiter during reentry. The hypersonic boundary layer is the layer of air molecules that clings to microscopic imperfections in the orbiter’s surface.  This information will be used in comparisons with wind tunnel experiments as well as computationally derived simulation of the flow field produced by Computational Fluid Dynamic computer models. 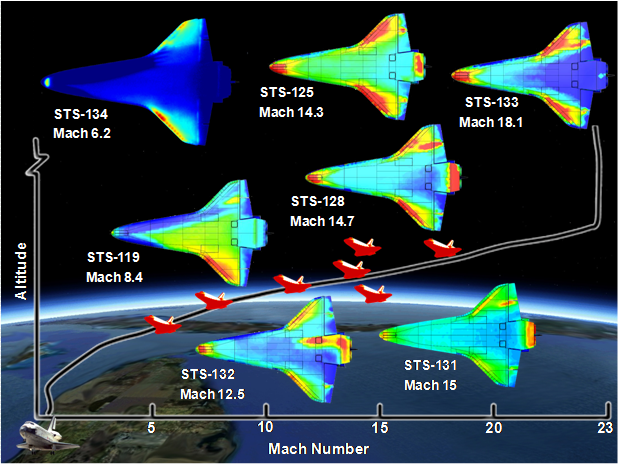 By observing seven Space Shuttle missions the team was able to view the vehicle at a wide variety of differing Mach numbers, both with and without the Space Shuttle Boundary Layer Transition Flight Experiment (BLTFE). The BLTFE was a complimentary project to the HYTHIRM effort, in which a small protrusion was built into one of the tiles on the wing of the Space Shuttle. This protrusion would cause the formation of a turbulent boundary layer, resulting in high temperatures in that region of the flowfield, under controlled experimental conditions. This was analogous to the way gap fillers were occasionally protruding from between tiles on the Orbiters, but this served as a controlled experiment where the exact size and shape of the protrusion was know. A series of three different protrusion heights were tested over five missions on two different Orbiters. Additional thermocouples, or instruments to measure temperature, (on the order of ten or so) were positioned to measure the temperature changes caused by the turbulent flow. These point measurements, taken in conjunction with the thermal maps obtained by HYTHIRM provided a wealth of unique information into the physics of hypersonic boundary layer behavior, and took advantage of the final opportunities for quite a while to conduct research on a large winged hypersonic flight vehicle such as the Shuttle.