Space Shuttle Discovery (OV-103) was launched on Sunday, March 15th, 2009.  After a 12 day mission to the International Space station (ISS), the Orbiter landed at the Kennedy Space Center on Saturday, March 28th, 2009. 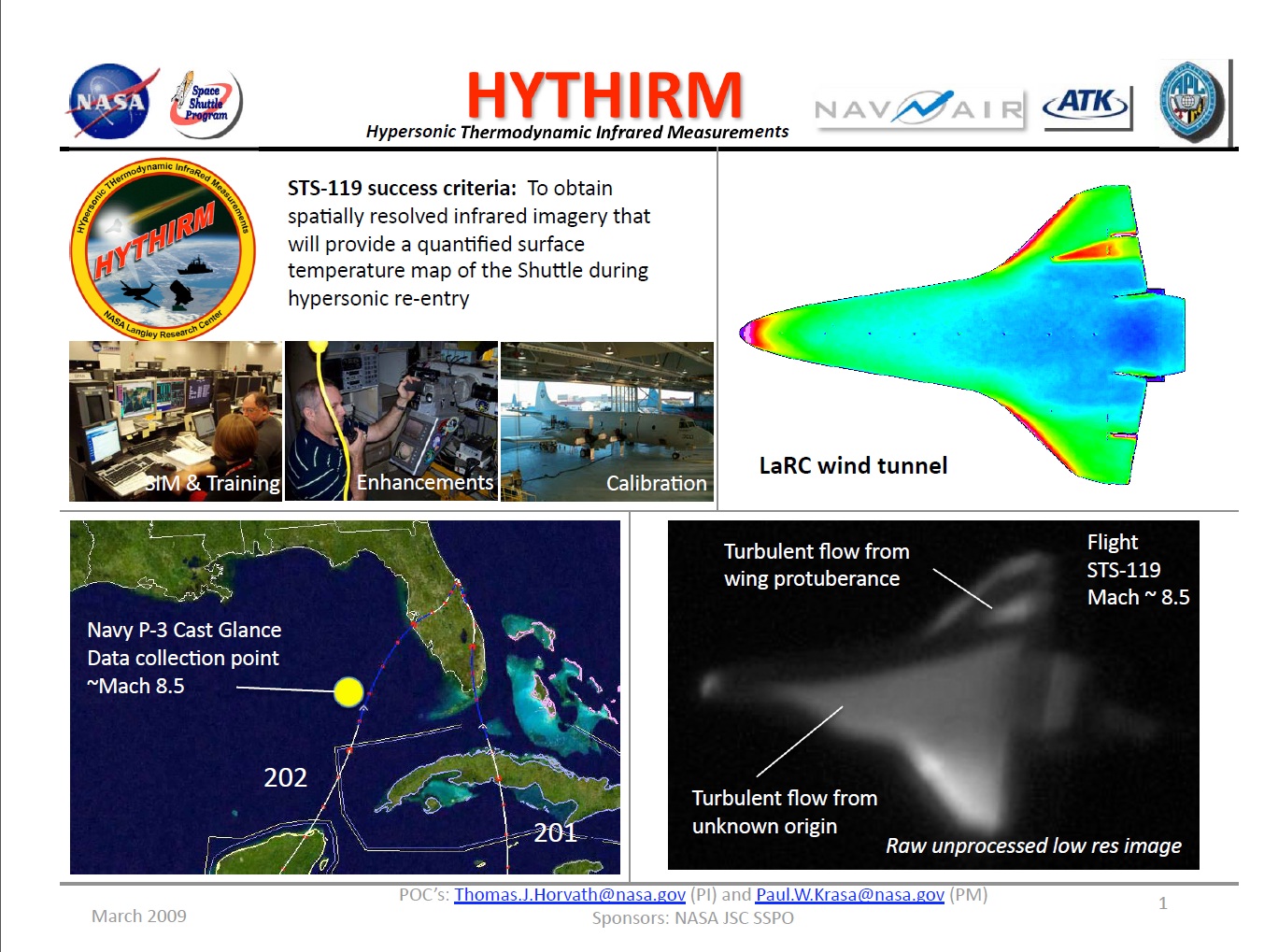 The HYTHIRM team deployed the US Navy CAST GLANCE (CG) NP-3D aircraft to obtain infrared imagery of the Space Shuttle during reentry.  For this mission the aircraft was staged out of the Cape Canaveral Air Force Station adjacent to the Kennedy Space Center (KSC) in Florida.

STS-119 was the first mission to fly with a Boundary Layer Transition Detailed Test Objective (BLT DTO), which involved placing a special tile on the underside of the port wing of Discovery.  This tile had a 0.25 inch high protrusion, approximately 6 inches in length integrated into it.  It was designed to initiate transition from laminar to turbulent flow in the region behind the protuberance at high Mach number, and act as a “control” experiment.  While the vehicle had added thermocouple instrumentation, HYTHIRM was endeavoring to obtain high resolution spatially resolved thermal imagery of the complex flow field that would result from this experiment.  HYTHIRM would target the Mach 13.5 point of reentry to view the fully developed turbulent flow behind the BLT DTO protuberance.

Following a twelve day mission in space, Discovery returned to KSC after a one-orbit wave-off on Saturday, March 28th.  Due to weather, CAST GLANCE was not able to position itself for an observation at Mach 13.5.  Working around the restrictions imposed by Cuban airspace and the orientation of the Orbiter, the aircraft was able to prepare for a observation with the point of closest approach (PCA) at Mach 8.

Discovery proceeded to reenter and land at KSC.  CAST GLANCE successfully acquired and tracked the vehicle for almost 8 minutes, and obtained the desired high resolution imagery.  In addition to clearly observing the turbulent flow behind the BLT DTO, a small surface imperfection near the nose of the Shuttle caused a large portion of the starboard side of the vehicle to experience “asymmetric” boundary layer transition, in which one side of the Orbiter experienced turbulent flow while the other side had laminar flow.  This was an unexpected flow feature that was fortuitously captured by the in-flight imagery.  Following the imaging of the Orbiter CAST GLANCE returned to the Cape Canaveral Air Force Station to complete a mission that exceeded all expectations in the quality and quantity of data acquired.