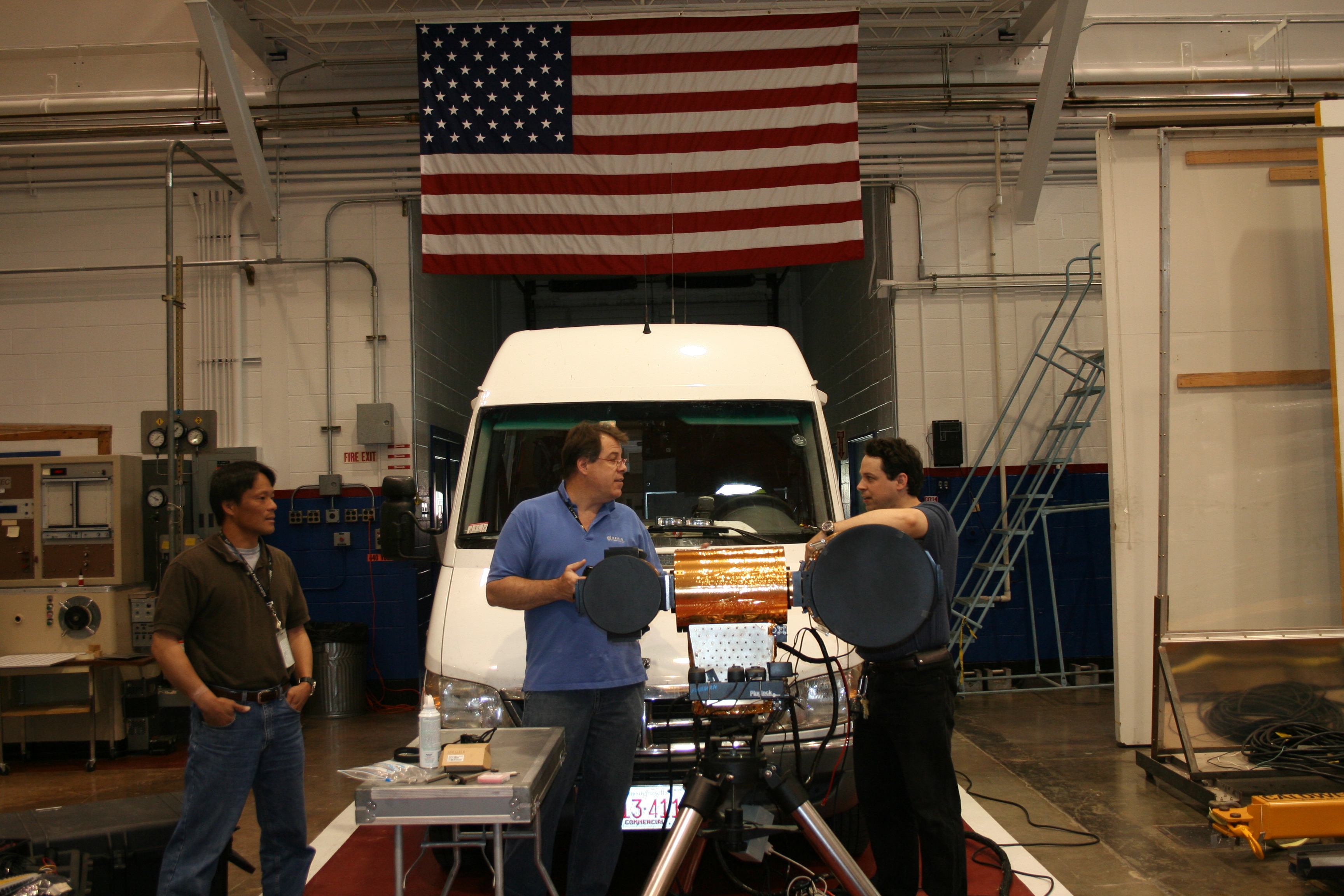 Space Shuttle Discovery (OV-103) was launched on Monday, April 5th, 2010.  After a 15 day mission to the International Space Station (ISS), the Orbiter landed at the Kennedy Space Center (KSC) in Florida on Tuesday, April 20th, 2010.

STS-131 was unique among the HYTHIRM missions in that the Shuttle flew a rare descending node reentry, approaching the landing site from a northerly direction after overflying the continental United States (CONUS).  This approach was chosen in order to better manage crew timelines.

The HYTHIRM team planned to deploy the US Navy CAST GLANCE (CG) P-3 observation aircraft as well as two Clay Observatory Mobile Aerospace Reconnaissance Systems (MARS) land-based imaging assets (Figure 1).  However, a scheduling conflict threatened the availability of the CAST GLANCE aircraft.  Mission planning for CAST GLANCE continued until the last few days of the STS-131 mission, when it became apparent they would not be able to support the Space Shuttle mission.

The launch of Discovery had been delayed several times.  The earlier launch dates had planned on an ascending node reentry trajectory, which would bring the Orbiter from a southerly direction over Mexico or Central America and the Gulf of Mexico towards Florida.  In anticipation of CAST GLANCE deploying for such a mission diplomatic clearances for Mexico and the Central American counties were obtained.  However, due to the delays it became apparent that crew timelines would be better served by displacing the reentry by 8 hours, which made a descending node trajectory more favorable.  Because CAST GLANCE participation was still a possibility at this time, planning went into airspace coordination for an airborne observation over CONUS.  Ultimately as CAST GLANCE was unavailable for the mission full concentration was given to the two MARS units.

The two MARS units left their home base of Boston to travel to Memphis, Tennessee where they were met by NASA personnel and the Langley based UC-12 Huron aircraft.  The aircraft was operated by the Research Services Directorate (RSD).  The UC-12 aircraft, a military version of a Beech King Air 200, was used to transport one of the two MARS units (MARS 1) over the northern, primary reentry trajectory.  This provided added flexibility in moving the MARS hardware in the case of a one-day delay.  The second MARS unit (MARS 2) would stay in the more southern region of the country and cover for the possible one orbit waveoff scenario.  MARS 2 traveled in their specially outfitted control and command van.

For the nominal End Of Mission (EOM), the MARS 1 unit set up at the Wokal Field / Glasgow International Airport (KGGW) in Glasgow, Montana for a Mach 19.5 observation.  The MARS 2 unit went to Okmulgee Regional Airport (KOKM) in Okmulgee, Oklahoma.  Both units set up and were prepared for a data collect when the Flight Director waved off both landing attempts to KSC for the day due to inclement weather.  This necessitated a rapid redeploy of both units.

The MARS 1 unit packed up the UC-12 and headed for Grand Forks International Airport (KGFK), Grand Forks, North Dakota.  This would give them an optimal observation of the Orbiter at about Mach 20.  The MARS 2 team packed up the van and drove to Memorial Field Airport (KHOT), Hot Spring Arkansas.  The sites were chosen after detailed collaboration with the Spaceflight Meteorology Group (SMG) in order to minimize the chance of inclement weather at the observation locations.

The HYTHIRM team returned to console in the Red Flight Control Room (FCR) in the middle of the night in order to support the early morning landing at KSC.  Both MARS units reported that star calibrations had been completed and they were in favorable weather conditions for an observation.  The Flight Director waved off the first attempt to KSC due to weather, but pressed on for the second KSC landing attempt.  Weather at KSC continued to improve, and the crew was given the “GO” for de-orbit burn. This brought the Orbiter over the MARS 2 location, where they manually tracked the vehicle and obtained resolved thermal imagery at approximately Mach 15.

In the days following landing the team reconvened at NASA Langley Research Center (LaRC) for calibration of the MARS system.  The MARS team then departed for their return to Boston.