Space Shuttle Endeavour (OV-105) was launched on Monday, May 16, 2011.  After a 15 day mission to the International Space Station (ISS), the Orbiter landed at the Kennedy Space Center (KSC) in Florida on Wednesday, June 1st, 2011. 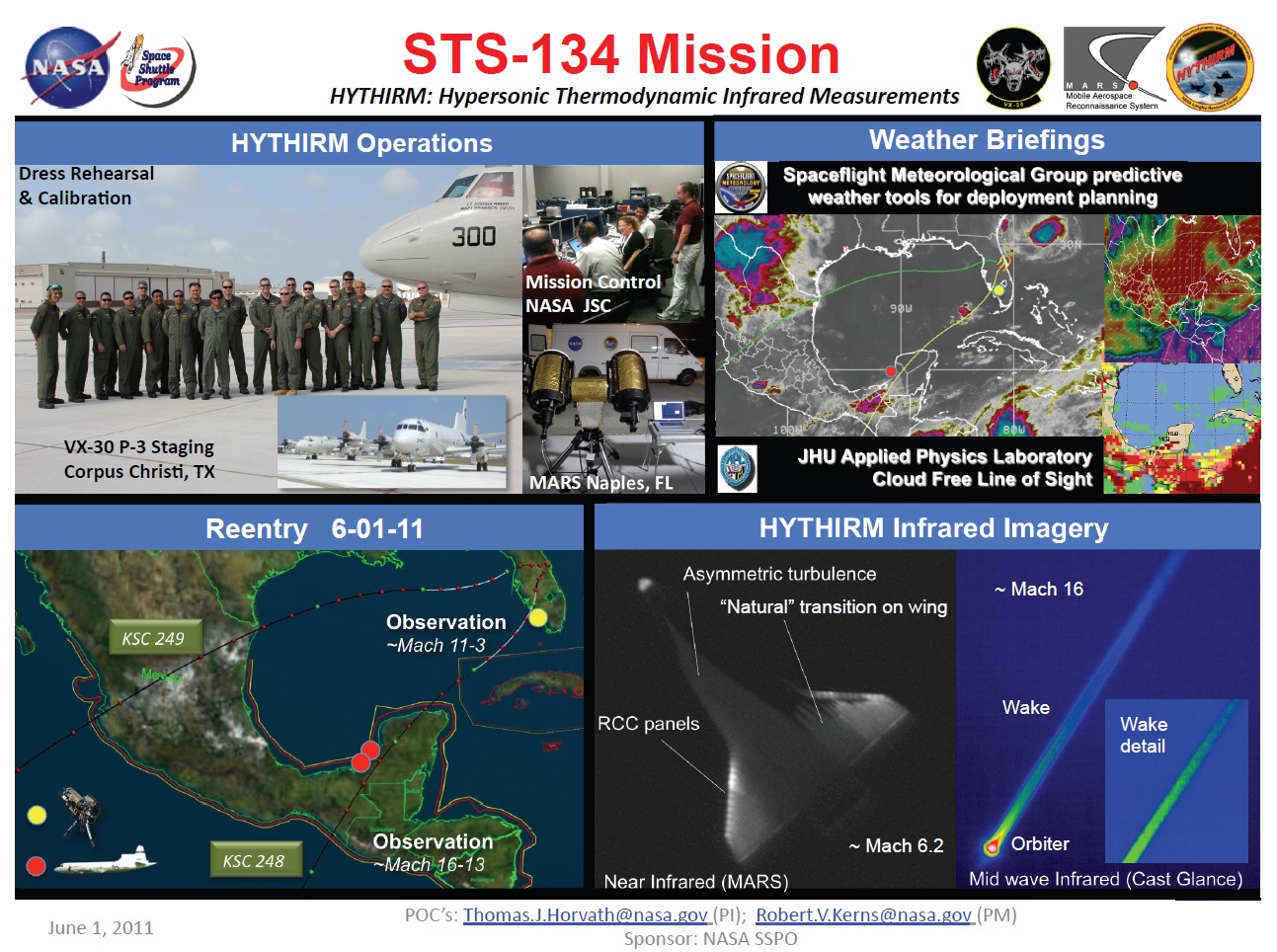 The HYTHIRM team deployed two aircraft in order to obtain infrared (IR) imagery of the Orbiter during reentry (Figure 1).  The goal was to obtain data about with the Orbiter at Mach 18.5 with one aircraft and at Mach 17.5 with the second aircraft.  Additionally, one Celestial Computing Mobile Aerospace Reconnaissance System (MARS) deployed on their own behalf on the west coast of Florida in order to observe the Mach 6 to Mach 4 portion of the reentry. They requested and received trajectory and mission status support from the HYTHIRM team.

Two US Navy CAST GLANCE (CG) NP-3D aircraft were dispatched over Central America.  The aircraft had deployed earlier than nominal in order to assess weather conditions at the observation locations.  One aircraft reported mechanical problems with their optical tracking system prior to takeoff.  It proceeded to the appropriate test support point (TSP) but was unable to resolve the hardware issue and did not acquire any data.  The second aircraft proceeded to the Mach 18.5 TSP.   Due to weather the aircraft had to move down the trajectory to the Mach 16.5 location.  That aircraft had a problem with the tracking computer for the optical system.  The hardware fault resulted in the Orbiter being acquired optically when it was almost at the point of closest approach.  The result was a limited data set consisting mainly of Mid-Wave Infrared (MWIR) imagery of the Orbiter high temperature plasma wake.

The MARS mobile ground based system set up in the Naples region of Florida in anticipation of the Orbiter reentering on the first attempt.  Under clear skies the MARS unit successfully obtained very high resolution thermal imagery of the Orbiter as it overflew their position.